Well, it’s official! I somehow managed to miss not one but TWO calls from the university president to my cell phone this weekend, though as a result I now have the call recorded on voicemail and can listen to it on repeat.  I got the call in front of my husband and kids and did a wild happy dance while I was listening to it, so of course my three-year-old asked for it over and over again that night: “Mama, I want to listen to when you got tenure again.” (My heart, it melts!)

We celebrated at a local Italian bakery.  S had cannolis for the first time at his friend I’s birthday party at daycare this week, and apparently cried when he couldn’t have seconds.  I gave him the choice between ice cream and cannolis, and he chose cannolis, but then once we got there wound up more interested in the fruit cake and chocolate mousse.  What could I say… eat your heart out, kiddo!  Maybe we’ll do this again if I ever get promoted to full professor. 🙂 Here’s the photographic evidence: 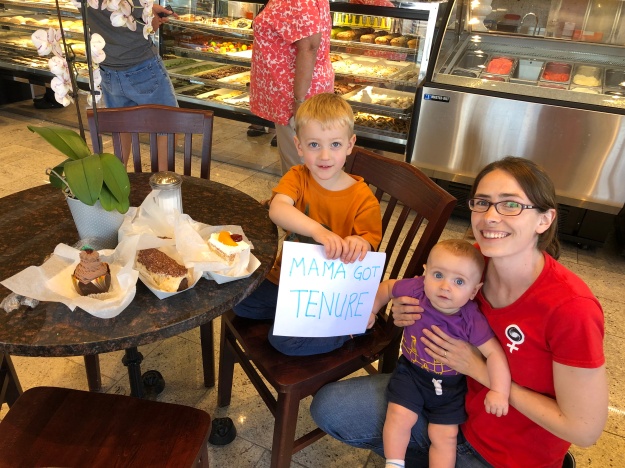 Friends, SO MUCH LIFE has happened on the tenure track. In case you’ve missed the tally along the line, here’s the cliffs notes version of what didn’t go into my tenure packet…

It’s been quite a ride, and since I’ve been busy thanking everyone who helped me along the way this week, I wanted to make sure to give you all a big, giant THANK YOU.  As I look back down that list, I would definitely not have made it through years 3-6 without this outlet.  I am so grateful to those of you who have been with me, cheering me on, for part or all of this journey.  It’s been a wild ride, but I couldn’t be more grateful to be where I am now, and to have met such amazing people along the way.

I’m the faculty advisor for our campus Women in Science group.  The way the group functions (which I inherited) is that we maintain a vast email list, but a “steering committee” of about half a dozen students does most of the work of planning and executing activities for the group.  I interact almost exclusively with the steering committee, though I occasionally interact with a random assortment of members who come to the various events.

Today was my last steering committee meeting with all three of them in the room.  I cried.  They did too.

I have had so many special moments with these amazing women over the years, and my relationship with each is so very different.

M has been a late bloomer throughout her time in academia, so she is almost my age.  I have watched her struggle with physical and mental health, her own doubts, and the difficulties that plague any PhD student as projects stall or dead-end and writing becomes overwhelming.  I’ve watched her stress about teaching her first courses.  I’ve watched her blooming relationship with a visiting professor who then moved away, and her subsequent (successful!) efforts to maintain their relationship long-distance.  I’ve also watched her meticulously consider every aspect of each event that we’ve planned, catching problems before they happen, and often being more thoughtful than I am about the impact of our choices.  She’s the kind of person who will freeze up when asked to address a crowded room, but who thrives as the force behind the scenes.  She sees what needs to be done, and does it.  She is kind and loving and works to make everyone feel welcome.  She spots the tough problems and then solves them, like a true mathematician.  She will defend her PhD thesis on Thursday, and I will be there to cheer her on.

J arrived on campus freshman year with no idea what it takes to succeed in college, but a huge store of drive and persistence and curiosity.  I don’t know what made her want to join the steering committee, and to be honest, when she did join, I worried that we had made a mistake in selecting her.  The first year, I had to be on top of any event that she was placed in charge of, because she had no idea how to organize or lead.  Then, something clicked.  I will never forget when we organized a screening of Hidden Figures and J put together a panel on women of color in STEM after the screening.  She prepared an introductory speech and questions for the panelist.  There were probably 100 people in attendance.  She had never led a big event like this before.  I went over her speech with her ahead of time, and I remember her hands shaking as she clutched the paper and walked to the podium.  Her voice shook at first, then gained conviction.  She nailed it.  The event was a smashing success.  After that, she seemed to grow into her leadership role and these past two years has been a powerhouse.  At the campus leadership awards ceremony this weekend, she accepted awards on behalf of three organizations (out of 11 awards given!).  One of those awards was for our WIS group, and we wouldn’t have won it if J hadn’t had the idea that we should nominate ourselves — and then drafted the nomination herself.  Next year she is off to nursing school, and her patients are going to be so incredibly fortunate to have her in their corner.

K’s reputation was already well established on campus when she joined the steering committee.  She won a freshman leadership award, was a prominent face within the STEM community on campus, and was already involved in a wide array of student groups.  Her application to the steering committee minutely dissected our mission statement, explicitly pointing to strengths and weaknesses of our current slate of activities and offering a plethora of brilliant ideas to strengthen our organization.  The only objection to adding her to the group (raised by M, I think!) was a worry that she might be overcommitted and not have enough time to really contribute to the group.  When she joined the committee, it felt like she single-handedly raised the profile of our group, and instantaneously connected us to the other active and relevant groups of which she was a part.  She is brilliant at organizing and leadership.  When we had a budget overrun, she suggested ways to invest the leftovers in assets that the group could carry over from one year to the next.  She always keeps an eye on our mission and has helped to guide the group in new directions and into new collaborations.  She was set to graduate in three years.  And then, she hit a wall.  She took a leave of absence for medical reasons, related to mental health.  She was open about what happened to her, and that she was hospitalized and would be on leave.  J kept in touch, said she was having a hard time.  We sent notes of support, but tried not to bother her.  We didn’t know if she’d come back.  But she did — she just appeared one day at a meeting, and we were thrilled.  Then she took my course on STEM equity and inclusion, and kept working towards the goals of making our community a more welcoming and equitable place.  This year she won the senior class leadership award, and I couldn’t have been prouder at how far she’s come, and how she worked to come back from her significant setback.  She is a paragon of strength, a gifted scientist, and a gift to our community.  She is off to work as a researcher in a big R1 lab next year, and I can’t wait to see where her abilities take her next.

This particular group of graduating students feels so special to me.  They are each remarkable, in such different ways.  The future is bright for our group.  We have amazing freshman, sophomore, and junior members remaining.  Thanking the students for their service and saying goodbye to them today made me appreciate my work so much.  I get to interact with such amazing people at such a transformative juncture of their lives.  I get to watch and encourage their growth.  It’s the blessing and the curse of being liberal arts college faculty: I have a constant rotating cast of incredible students with whom I form deep relationships.  I get to be part of their growth at a critical time in their lives, in a very meaningful way.  But I only get them for a few years — then I have to say goodbye.  Sometimes they reappear, but never for long.  It’s a microcosm of life, I suppose.  A reminder that everyone in my life — my children, my husband, my mother, my friends — are all on temporary loan from the Universe, and that beginnings and endings are part of the human condition.  I love them while I can, I do my best to help them on their way, and I wish them well as they move on.